Cyberterrorism – Like Hackers the Movie, yes that’s the one with Angelina Jolie

This week’s class discussion has already combatted many touchy subjects on terrorism and the US governemnt. I like to stray from my feelings towards the US goverment because I am an outsider, a foreigner, and have discovered my views to be very different and somewhat harsh as compared to American Citizens.

I randomly googled terrorism and Canada to find an interesting website entiteld: “Terrorism: Questions and Answers” – it seems to encompass everything you ever wanted to know about the US and terrorism since 9-11. 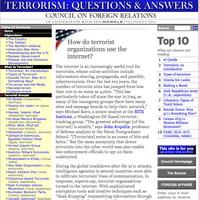 This week’s discussion question, “Surveillance: friend or foe? Reflect on, analyze and summarize the advantages and disadvantages of electronic surveillance pre and post 9/11.”

Within the website, I found an article about ‘cyberterrorism’, which along with the rest of the entire site, scares every American about the threat of Terrorism and how easy it is for the entire computer network of the government to be dissolved in minutes…

I quote, “What kinds of attacks are considered cyberterrorism?
Cyberterrorism could involve destroying the actual machinery of the information infrastructure; remotely disrupting the information technology underlying the Internet, government computer networks, or critical civilian systems such as financial networks or mass media; or using computer networks to take over machines that control traffic lights, power plants, or dams in order to wreak havoc.

How do cyberattacks work?
Attacks on the physical components of the information infrastructure would resemble other conventional attacks: for example, a bomb could be used to destroy a government computer bank, key components of the Internet infrastructure, or telephone switching equipment. Another option would be an electromagnetic weapon emitting a pulse that could destroy or interrupt electronic equipment.

Attacks launched in cyberspace could involve diverse methods of exploiting vulnerabilities in computer security: computer viruses, stolen passwords, insider collusion, software with secret “back doors” that intruders can penetrate undetected, and orchestrated torrents of electronic traffic that overwhelm computers—which are known as “denial of service” attacks. Attacks could also involve stealing classified files, altering the content of Web pages, disseminating false information, sabotaging operations, erasing data, or threatening to divulge confidential information or system weaknesses unless a payment or political concession is made. If terrorists managed to disrupt financial markets or media broadcasts, an attack could undermine confidence or sow panic…

What can be done to protect against cyberterrorism?
Experts stress vigilance about computer security: patching security flaws quickly once they’re detected, designing systems to withstand attacks, backing up systems off-site so they can bounce back quickly from a disruption, watching for disgruntled employees who might help terrorists penetrate a system.