The Panic to Monetize Social Media

While on the hunt to find ways to add to my company’s profile on LinkedIn I noticed a new link in the top right hand corner:  “Interested in a premium account profile?”–why I might just be. After scanning a few “quick PDF’s” on what the premium account is I was confused more then ever, so I just filled out the lovely AJAX form and waited for someone to contact me. 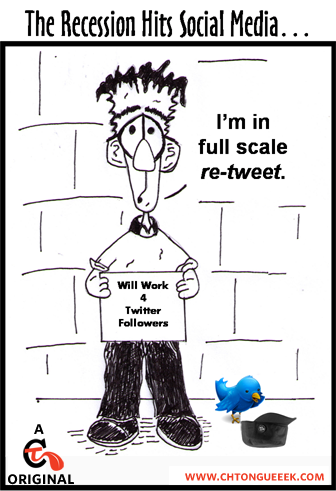 I got a call from a LinkedIn sales representative. The very nice lady explained to me the premium company pages start at $25,000. Holy Crap.  I still don’t know what Premium Profile means but it better include a solid gold membership plaque! The way it sounded they didn’t really know what it was either. Instead, it was more like tell-us-what-you-want-and-we-can-do-it-for-a-price; a.k.a. they have no clue what they are selling but they know they need to change their business model quickly to start paying for hosting everyone’s crap.

With the following stats floating around the internet it is no wonder Social Media Grade-A sites like LinkedIn are suddenly introducing new features with expensive price tags.

The social network (Facebook) is running up a huge tab to store and serve up all the photos, videos and other junk you stuff into your profile. Ad rates on its network are terribly low, the company doesn’t make a profit and it hasn’t shed any light on how it will make good on investments that valued the company at $15-billion (excerpt: Everybody’s surfing. No one’s paying).

The problem with Social Media monetization is that companies generally flock to the web because of its perceived low-cost to market goods or services–not to necessarily engage their customers or enhance the customer/company relationship.

Generally speaking, I would say the only exception to this rule is large companies with a well established online presence and a desperate need to partner with a hip young 2.0 website to show they are not dinosaurs. (LinkedIn should really just call  HP or Microsoft).

Case in point: TicketMaster and Eventful… why the partnership? Well it’s not because Eventful is going to be adding to their bottom line. Eventful is not even profitable; it is simply because they don’t know how to enter the 2.0 Webspace and it scares them so they bought a website to fill their need.

Glazier was to reluctant to provide any concrete financial information, other than the already public funding figures, but he says that the team is working extremely hard to drive revenue and turn profitable by Q4 of 2009 (excerpt: http://www.startupsd.net/spotlight/post/eventful-demanding-attention-and-seeking-profitability second to last paragraph).

The race to monetize social media has begun. In fact, I don’t even think it is a race, more like a pure panic to stay alive. No longer can Silicon Valley support projects designed for the advancement of the world. They have to come up with a real old school business plan and fast. I know I know, the majority of social media enthusiasts will be up in arms: “that is not what it is about, it is about creating portals of information and advancing knowledge and communication for the greater good of the world!” Welcome to the real world hippies–you need money (jk).

Google will lose $470-million (all figures US) on the video-sharing site (YouTube) this year alone… The Boston Globe, which is on track to lose $85-million in 2009, is five times more profitable–or, rather, less unprofitable–than YouTube (excerpt: Everybody’s surfing. No one’s paying).

The only company with what seems to be a real plan is–surprise surprise–Google. They seem to have recognized that the only way to get out of the 2.0 financial mess is to put their blinders on and keep moving forward.  Analysts estimate Google pays about $360 Million dollars a year on bandwidth. They obviously couldn’t just ignore web 2.0 if they still want to be a dominating force in the future. Granted YouTube was probably not the right direction, but kudos to them for recognizing their biggest threat is not MSN or Yahoo but human generated content sites. No one will trust a robots algorithms over real human feedback. Most people are not even aware what it takes to place high on Google’s rankings, and just assume that SERP is just advertising. Human generated content will always provide better results than any robot ever could.

But what would happen if Googlebot and human generated content combined forces? Then you would get Google Search Wiki! Yes that’s right, its a search engine, its a wiki, it’s Google Search Wiki! Users can add comments/content to search results and Google can use the data however they see fit, humanizing the result. This is the way Google needs to innovate.  I look forward to seeing the monster grow and develop in this new organic direction.

3 comments for “The Panic to Monetize Social Media”